Google WiFi is one of the best wireless routers that encircles convenience, performance, and value in one single package. Google’s mesh router is a wireless one that is affordable as well as stylish enough to secure a prominent place in your house. By setting up Google WiFi app, you can easily stream all you want online. 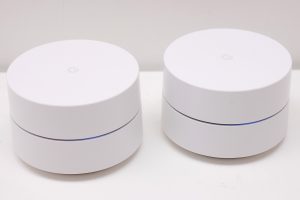 Google WiFi is easy to set up and offers flawless connectivity. So, before you make your purchase, let’s see whether it’s worth your money or not.

Choosing Google WiFi can be a wise decision due to the following features:

Elegance is the first thing that is noticeable when you pull the Google WiFi out of the box. Earlier, wireless routers used to look unpleasant with antennas sticking out in different directions. But, Google WiFi has revolutionized the concept of routers by removing the use of antennas. Google WiFi is pleasing in its appearance with a simple white design and a single color-coded light band.

Google WiFi setup process is so awesome that you hardly require any skill for setting up this router. Thus, you won’t have to surf the web to learn about the setup process. You can use any of the three WiFi nodes of this router for connecting to your modem.

In order to use Google WiFi, simply download the Google WiFi app from the App Store or Google Play Store. Then, scan the QR Code located on each unit, place them, and finally label them.

Network Admin for Everyone

Google WiFi allows its users to have complete control over their networks. There is no need to browse the web or dig through the IP configuration to find your network gateway. Thus, you can avoid all the backend tasks required for admin access. Google WiFi allows you to set up a guest WiFi network to perform all your network admin tasks. You can even manage family controls and determine whether all nodes of the router are working correctly or not.

Furthermore, Google WiFi app comes with a built-in network to diagnose the problem areas in your mesh networks. Hence, you can easily identify which of Google WiFi nodes is getting less than the ideal signal.

As a result, you can shift the particular node to an area that does not have network issues. Google WiFi can automatically handle a couple of more advanced functions. That’s why the experienced network admins will have finer controls over your network.

Each node of Google WiFi has two Gigabit Ethernet ports and a USB-C port that is used for power. Hence, it is possible to have LAN connections at any desired part of your home. But, you will be left wanting if you set up several LAN ports in one room. Furthermore, Google WiFi is a tri-band router whose modes communicate on their own bandwidth.

So, your gaming won’t be interrupted if someone else is streaming or browsing the internet by using the same router. Though the AC1200 Wave 2 capabilities are impressive enough, you can ass the quad-core ARM processor. This processor directs signals to the device with the highest demand to offer outstanding performance throughout your home and workplace.

For example, you can set up several Google WiFi points throughout your home and surf the internet from any location. It happens because your device gets signals from the node that is closest to it. Since it is an automatic process, you won’t have to change the settings manually.

While using Google WiFi you won’t have to run into a single problem like slow or dropped connections. Furthermore, you will get a notification by the color-coded LEDs if a node is getting down.

Thus, you can immediately shift your device to another node or move the node to a signal-friendly area. You can thereby access fast internet from anywhere at your home. 250Mbps is the minimum speed of the internet you will get from Google WiFi. Also, it is capable of supporting multiple devices connected to the router at the same time.

Though Google WiFi doesn’t support multi-user, multi-input, or multi-output, it doesn’t matter due to the nature of the mesh network. Google WiFi offers more than expected speed, for everyday workloads unless it has to handle a heavy load.

Affordable for Almost Everyone

You have to spend $129 only for a single WiFi point of Google WiFi. Larger homes that require added coverage can afford Google WiFi at $299 only. It might seem to be expensive for those who use their router built into their cable modem. But, once you start using Google WiFi, you will understand that it’s worth the cash.

Google WiFi charges a higher price as it provides advanced features and more individual nodes when compared to other brands. Thus, you can’t complain as you can cover a great area for a less amount.

You will need to pay $320 for availing one router and satellite of Netgear Orbi as opposed to three nodes of Google WiFi. But, don’t think that Netgear is overcharging users because it can provide coverage of 5000 feet as opposed to the 4000 feet of WiFi.

Google WiFi is s better choice for those who want to set up their router easily. Whereas, Netgear Orbi is the preference of advanced network admins who want to have greater control over their network.

When Google WiFi provides tons of performance at a slightly lower price, Netgear Orbi is a more powerful option at a higher price Therefore, you can make your decision based on the router which is going to meet your preferences.

There is no doubt that Google WiFi is one of the best wireless routers prevailing in the market. It is not only easy to set up but provide stellar performance and looks good to boot. It is as versatile as other routers you can find but the striking point is its multiple user-friendly features. You can connect your device and browser the internet without chances of going wrong with Google WiFi.